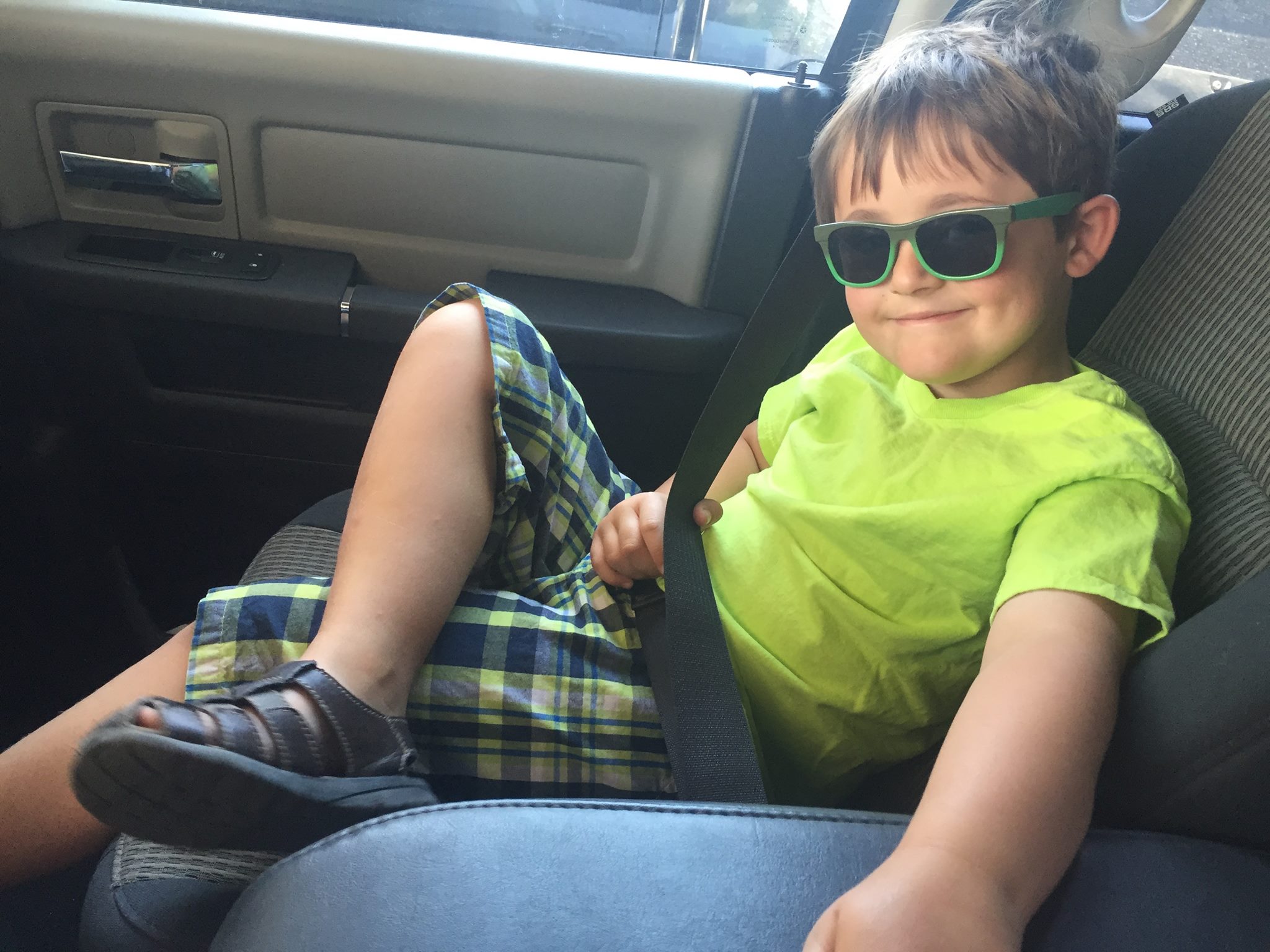 Landon Taylor Wilson age 5[/caption] Our story is a beautiful one.  Adopting our son was God’s plan.  I don’t say that to imply that I have a direct link to God and have some kind of insight to his will, but after experiencing this truly amazing process, I have no doubt.  He orchestrated our union in a truly miraculous way from the time my phone rang until the judge finalized our adoption papers just 77 days later. And God is still working in Landon’s life every day.  It’s clear and easy to see that this little boy is destined for a great life of value and purpose, and we are truly humbled every day that God chose to allow us to be a part of it.     [caption id="attachment_6650" align="alignright" width="274"] 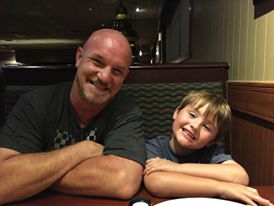 Landon and his dad, Michael[/caption] My husband and I wanted a child, but we had also arrived at a place in our life where we were also okay with the idea of not being parents. We had briefly talked about adopting, but thought it would be impossible because of the cost. Like most couples we thought about adoption in terms of bringing a baby into our lives to love, nurture and guide. We had never given much thought to private adoption or to what adopting a young child with experiences and memories would be like.     [caption id="attachment_6648" align="alignleft" width="300"] 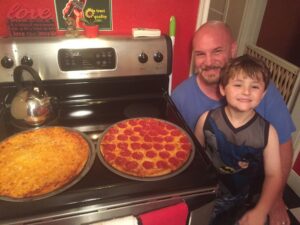 Landon loves making homemade pizza with his dad on family movie nights.[/caption] Frankly, I don’t think we considered it much because it was a bit of a frightening concept.  Having worked in non-profit social services and animal rescue, I knew very well that people are cruel.  I thought many of the children who needed homes would be victims in a variety of ways.  Children are in need of  homes because of issues of abuse, neglect, abandonment or loss, right?  So I, like many of us, made an assumption of who those children were and what they would be like.  I’ve learned a lot since then, and one of the things I’ve learned  is that children from difficult pasts are not to be pitied.  They aren’t broken little things for someone to take on as a “project” to fix and heal.  That’s God’s job.  Instead we should look at them with awe and amazement.  The resilience, the faith and the love of a little child can be a life lesson for all adults.  They aren’t broken or damaged.  They are strong and inspiring, and what they need is love and stability.  Now more than ever, I know love does conquer all.     [caption id="attachment_6647" align="alignright" width="300"] 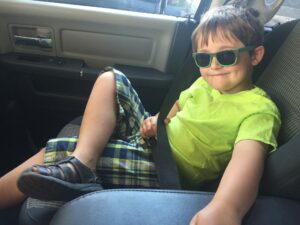 Yes, he really is a cool kid ;-)[/caption] So my phone rang that day and I was told the story of a little boy named Landon.  I won’t go into the details of his past, because that’s Landon’s story to tell, not mine.  What I will say is that he had experienced far too much heartache for a three year old child.  He needed a home immediately, and he was turning four in just five days.  I’m a worrier.  I panic. Anyone who knows me would tell you the same.  I overthink most situations with the haunting “what if” scenarios.  When I hear myself share our story today, I am amazed by how that phone call took place.  There was no hesitation.  There was no worry.  There was no “what if”.  I said, “When can we meet him” and from that moment all I knew was that tomorrow, I had an appointment to meet my son for the first time.     [caption id="attachment_6651" align="alignleft" width="274"] 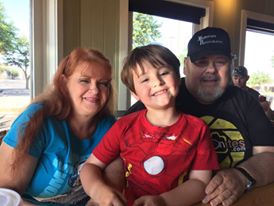 Landon with his grandparents (my mom and dad)[/caption] My husband was the same way.  We had no real hesitation, no real fear.  We were  a bit nervous with the prospect of becoming parents overnight.  We had never done anything like this before, but looking back on the day we met our son, I’m amazed at how calm and confident we were.  We were totally at peace.  We were ready to proceed.  Without our realizing it,  God had silently prepared us for this moment.  We would meet Landon and immediately become a family, and that is truly how it happened.  That little boy called us mom and dad from the very first minute. Even though he didn’t have the ability to realize it at just 3 years, God had prepared him for this moment, too.  He was ready for his – OUR new chapter.   At 8am the next morning, Landon came to live with us.     [caption id="attachment_6652" align="alignright" width="206"] 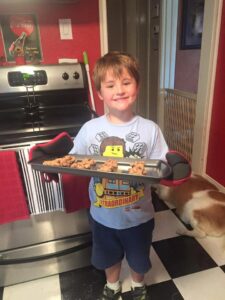 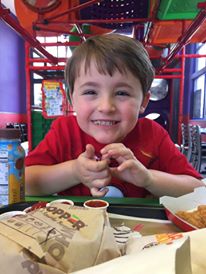 Landon finds joy in everything.[/caption] Now, I won’t lie and say we haven’t had a couple of challenges and set backs along the way since that January day, but what parent to a five year can say that?  Landon loves us and we love him. We may not be responsible for his biological existence, but he is every bit our son.  We feel very blessed knowing that God joined our family. Like a beautiful, complicated puzzle, God took all of our pieces, even the ones that were a little battered and worn, and put together a completed masterpiece.  There is no beautiful mistake or happenstance here.  This was planned.  Landon was our destiny.  My husband and I know beyond a doubt that we three were meant to be together.  It’s truly humbling to be the parents to this amazing, beautiful, loving and vivacious creature., but at times, I allow it to be a great pressure as well. Knowing you’ve received a gift that God himself wrapped and delivered can be overwhelming.  We want to be the BEST parents.  We struggled with how to do this right. This child has to be perfect, for God ordained it to be so, right?   Well, yes and no.  In our eyes, Landon is perfect and he is a child and creation of God.  We are not a perfect family, but there is also absolute beauty in that.  We are learning from each other and growing together.  What a beautiful life it is.     [caption id="attachment_6653" align="alignleft" width="206"] 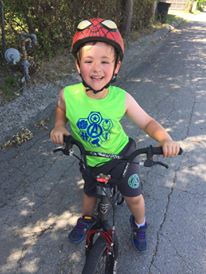 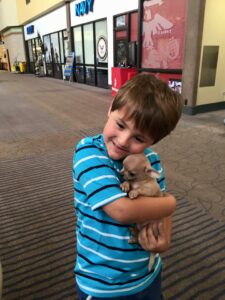 Landon loves animals.[/caption] That little boy has brought such joy into our lives.   His laughter lights up our home.   He makes me want to be better in all ways.  I look at his five years on this earth, knowing what he has experienced, and I am in awe.  Could I have overcome the things he has?  He’s truly inspiring and I am humbled and honored that God has allowed me to his mom. Adoption is a beautiful thing… not just for the children, but for the parents whose world will be forever changed and made beautiful by the love of an adopted child.  Happy National Adoption Day!   [caption id="attachment_6656" align="aligncenter" width="300"] 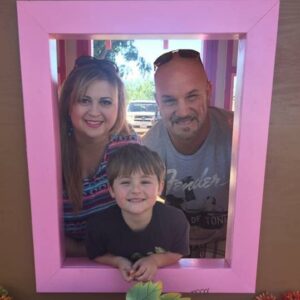